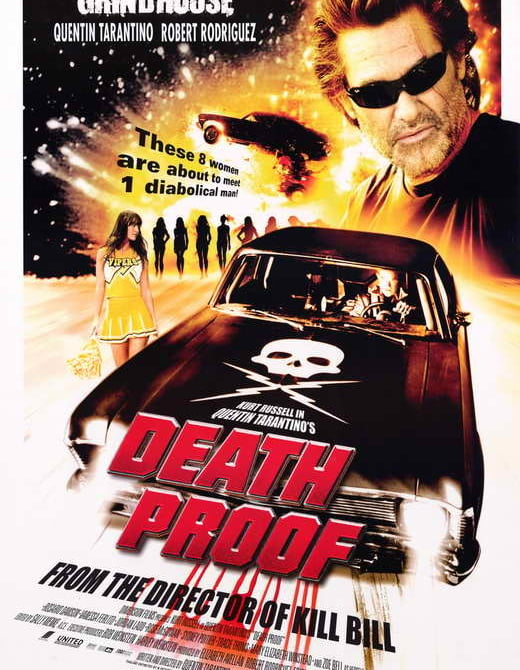 Fans of this column know that I have twice reviewed Vanishing Point – the 1971 original that remains one of my favorite car movies of all time, and subsequent to that, the less-than-stellar 1997 version. For years I have desired to see Hollywood revisit this classic and do a proper remake. There were rumors that this was going to come to pass, with Fight Club director, David Fincher, at the helm, but nothing came of it. So what is a rabid fan of white 1970 Dodge Challengers roaring through the desert like me to do until a remake is made? Watch the next best thing, of course: Quentin Tarantino’s Vanishing Point tribute, Death Proof (2007), the subject of this months Rob’s Movie Car Review.

Produced by Dimension Films in conjunction with the Weinstein Company, Death Proof stars Kurt Russell, Zoe Bell, Rosario Dawson, Rose McGowan and Mary Elizabeth Winstead. The film was released together with Robert Rodriguez’s Planet Terror under the collective title Grindhouse, as an homage to the B-movie double feature matinees common in the 1970s.

Death Proof follows the deadly machinations of the psychopathic Stuntman Mike (Russell) as he stalks and attempts to murder two groups of young girls, first at bar in Austin, Texas, and later along backwoods roads in Lebanon, Tennessee. His preferred method of mayhem is vehicular murder using a stunt car which has been “death proofed” to insure that he is unhurt during his exploits. He is successful in his attempt to kill the first group of young ladies, but then finds he may have bitten off more than he can chew with the second.

The film is essentially one big tip of the hat to all of the cinematic genres and pictures that Tarantino loves, including slasher films, exploitation flicks and most pertinent to our interests, car movies. In an effort to give the film an authentic 1970s feel, the movie’s set design, wardrobe and lighting all reflect that decade’s aesthetic, Tarantino even goes so far as to add scratches, missing frames and bad splices to the movie to complete the effect.

One of the girls, played by Zoe Bell, takes an ill advised ride on the hood of a 1970 Dodge Challenger R/T

The celebration of the seventies is complete with an array of eye-popping muscle cars. The star of the show is the iconic Vanishing Point tribute car, a 1970 Dodge Challenger R/T in EW1 Alpine White with a black vinyl interior. As if Tarantino was doing his utmost not to upset the ghost of Vanishing Point hero, Kowalski, the car in Death Proof is a ringer for the original movie car, down to the correct 375 bhp 440 Magnum engine with its single four-barrel carb, power bulge hood with twin air intakes and hood pins, body color screw-in gas cap, and 15-inch Rallye wheels with Goodyear Polyglas GT tires. The car only diverges from the original in that it is equipped with an automatic transmission instead of a four-speed with Hurst Pistol Grip shifter like the one Kowalski used. This is likely a concession to modern stunt drivers’ preference for slush-boxes.

Another four-wheeled star in the film is Stuntman Mike’s first car, a 1971 Chevy Nova SS in flat black with white skull and lightning-bolt hood graphic complete with an angry duck hood ornament. The inside of the Nova has been stripped, with the front passenger isolated from the driver by a plexiglass cage. The car is equipped with a 350ci engine, B&M shifter, rally wheels, Simpson racing seat and a roll cage. Sharp-eyed car movie fanatics will note that the Nova’s license plate is JJZ-109, the same as that of Steve McQueen’s ‘68 Mustang in Bullitt.

The second of Stuntman Mike’s cars is a 1969 Dodge Charger R/T. Also matte black, the Charger features a 440 Magnum Torqueflite automatic transmission and American Racing Vector wheels. Like with the Nova, the Charger’s license plate, 983-DAN, is a nod to another movie car, in this case the Charger in Dirty Mary, Crazy Larry which carried the same plate. Another cool vehicle in the film is a customized bright yellow 1972 Ford Mustang with a 302 cube V8.

Death Proof, like all of Quentin Tarantino’s films, is an enjoyable film that doesn’t require much thought to enjoy. It has plenty of dark humor, witty dialogue, and graphic violence that the director is famous for and combines all this with some serious automotive eye candy. A winning combination in my book. I give Death Proof seven out of ten pistons.

Better By Design: Bolting Up Ultimate Headers To Project Payback

Throwback Thursday: What You Need To Know About Street/Strip Brakes

Holley’s Sweepstakes To Give Away A Twin-Supercharged LS

Rob’s Car Movie Review: Once Upon A Time In Hollywood