Taylor Cable Products has been in the business of building spark plug wires since 1923. It recently expanded its line to include Vertex Magnetos. The company’s approach is to produce high-quality products in a wide variety of styles, but the main focus is spark plug wires, and that’s what we’ll be dealing with here.

We spoke with Justin Askren, a Taylor Cable technical specialist, who offered up some insight into spark plug wires. Some of his answers may surprise you. So let’s get started! 1.) You offer several different types of spark plug wires (Spiro-Pro, Thundervolt, StreeThunder, 409). So, what kind of wire is right for my needs?

A: StreeThunder is a good economy/daily-driver wire set, while our Spiro-Pro line is suitable for everything and is the most popular choice. The Thundervolt and 409 lines of wires are intended for performance/racing applications where high cylinder pressures demand the most voltage from low-resistance wires. A: The 8mm is sufficient for most street applications. Our ThunderVolt 50 10.4mm wire is especially recommended in high-boost/extreme-cylinder-pressure applications but will work fine on any engine. The thicker wire diameter provides a wider margin of safety to prevent voltage leaks.

3). What is the temperature rating of your spark plug wires? Plug wires are most often rated by their diameter. The most common are 7mm and 8mm thicknesses, but what’s more important is the conductor. The best choice is the spiro-wrap style Taylor wires that reduce resistance, minimize RFI noise, and offer the best performance.

A: We created a straight silicone material we call Zimplex that is rated at 600-degrees F used in our top of the line wires like the ThunderVolt 50. Our silicone-blend material rates at 500-degrees F, while our EPDM synthetic rubber measures 450-degrees F.

4). Is there a performance difference between different spark plug wires? A: This comes down to a question of quality. The OE manufacturers tend to use wires that produce roughly 3,500 to 5,000 ohms per foot. This is a measure of electrical resistance. Performance wires will measure much less, such as 40 ohms per foot. This reduced-resistance allows the engine to start easier and will produce a smoother idle. There is some minor performance improvement with this lower-resistance rating.

5). There appears to be several different distributor and coil connections for wires. What are they? 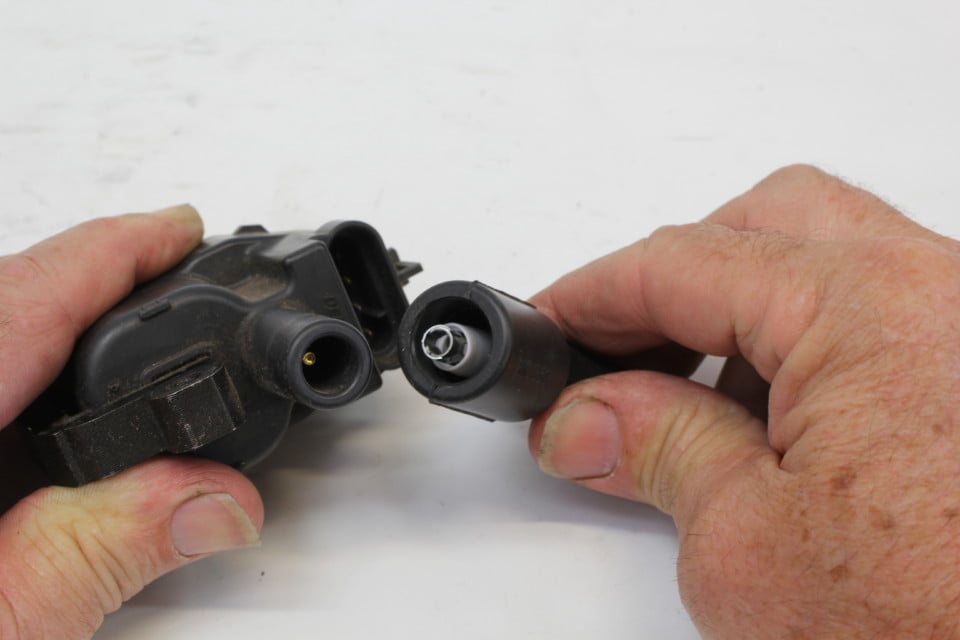 LS and Ford engines use a specific coil connector that is different from the standard male coil connectors. Taylor offers plug wires like these ThunderVolt 8.2 mm wires specifically for LS engines. The truck-application plug wires are longer than the passenger-car versions.

A: The most common is the male post on an HEI distributor. This takes a female-style connector. Older engines used a female socket in the cap that required a male socket end on the plug wire. With later model cars, the GM LS engines use individual coils, and this requires a special connector. Finally, the Ford Electronic Distributorless Ignition System (EDIS) also has its own unique coil connector.

6). Will I have radio or tachometer interference with spiro-wound wire? Measuring plug wire resistance is very easy with the help of a hand-held volt/ohm meter. With the meter set on 1K (1,000) ohms, connect one lead to each end of the wire and read the resistance. This Pro Spiro wire measured 4 ½-feet long and as you can see generates 1,661 ohms of resistance. Dividing 1,661 by 4.5 produces 369-ohms-per-foot resistance. If this wire was only two-feet long, the total resistance would drop to under 750 ohms, so keeping the wires short is advantageous.

A: The simple answer is no, but the reason why this occurs will require a little further information than is in this story.

7). Should I install heat socks over my spark plug wire boots? Routing plug wires is a matter of making sure the spark plug boots avoid contacting the header tube as this will quickly melt any silicone boot. Routing wires cleanly over the valve covers, for example, is easier with these Taylor interlocking plug wire separators. To make sure the Number 8 wire doesn’t melt on the header tube, we may reroute it underneath the header tube.

A: The main reason for heat socks is to minimize heat damage to the spark-plug-wire boot from melting because of its proximity to a header tube or cast-iron manifold. If you expect to have issues and have enough room for the sock to fit without touching the wire and/or the headers, yes. If the area next to the boot is too tight, the best solution is to dimple the tube to create sufficient clearance. Mild dimples even close to the head will not cause a loss of power.

While these quick questions and answers have covered a lot of material, some further technical details can be useful when choosing a set of plug wires. As mentioned earlier, reducing a plug wire’s resistance can make a measurable difference in performance. For street cars, a higher quality spark plug wire can make a significant difference.

The least expensive plug wires on the market — similar to older OE plug wires from the ‘70s — used a carbon-impregnated fiberglass weave as the conductor. The goal was to eliminate radio frequency interference (RFI) that is created when using solid-core spark plug wires. This is why solid-core plug wires cannot be used with EFI engines because of the extremely high electrical noise generated by RFI. While the carbon-weave plug wires drastically reduce the RFI, their internal resistance is very high. Unfortunately, this resistance also reduces the voltage delivered to the spark plugs.

The solution was the creation of spiral-wound or spiro-core plug wires. This design, as used in most of the Taylor plug wire catalog, wraps a very fine wire conductor around the plug wire’s magnetic core. This dense spiral wrap cancels out a majority of RFI while radically reducing the electrical resistance. Many enthusiasts prefer universal V8 plug wire kits that allow customizing plug wire length. Remember to leave additional length in the wires to enable the distributor to freedom of movement. A tight plug wire routing will literally not allow you to change timing!

If you are not sure of the amount of resistance of your engine’s plug wires, you can perform a simple resistance test with a hand-held volt/ohm meter (VOM). Merely remove both ends of the spark plug wire from the engine (it doesn’t have to be entirely removed from the engine) and connect the two leads on the VOM. With the selector set on 1K (1,000 ohms), the reading on the meter will indicate the amount of resistance.

By reducing the resistance in the plug wires, the coil does not have to work as hard because less voltage is lost to the resistance between the coil and spark plug. This is one reason why the OE’s eventually went to coil-near-plug ignition systems to reduce the length of the spark plug wires — thus further reducing resistance.

As an example of how reduced-resistance can improve performance, we tested a small-block street car with a four-gas exhaust-emissions analyzer and measured a reduction in hydrocarbon (HC) along with an improvement in CO2 levels, just by reducing the resistance in the spark plug wires. While few enthusiasts are concerned with emissions, these results indicate an improvement in combustion efficiency. Taylor offers ceramic boot plug wires as an option when boot clearance to the headers is tight. This is an LS engine with shorty headers and a set of Taylor ceramic boot wires.

Reducing HC (unburned hydrocarbons) means more of the fuel is burned during idle. During incomplete combustion, carbon monoxide is formed. A stronger spark produced by reducing the plug wire resistance allows the tuner to lean the air/fuel ratio slightly because less fuel is needed to support combustion. This minimizes the hydrocarbon and carbon monoxide numbers. At the same time, this increases the CO2 percentage — which is a positive goal since the formation of CO2 indicates more complete combustion. Overall, the engine runs better and is more efficient, which often results in an improved throttle response.

As mentioned in the introduction, even something as simple as a spark plug wire incorporates a tremendous amount of engineering. By learning a little bit more about that next set of wires you plan to buy, there’s now more to consider — which makes you a smarter enthusiast capable of better decisions.